What is methyl alcohol / methanol solution?

Methanol, also known as methyl alcohol, carbino, methane hydroxy, methylol, wood alcohol, wood naphtha or wood spirits, methyl alcohol. This is a chemical compound, the Methanol formula is CH 3 OH or CH 4 O. However, unlike normal alcohol, methanol is a strong and non-drinkable substance. It is only used in industry, as a solvent to dissolve production materials.
Methanol is produced from nature through the conversion of many anaerobic bacteria or through the biodegradation of waste, sewage and sludge. Methanol is most emitted from the environment because it is used as an industrial solvent, followed by methanol production, and finally in production, storage, use, and in fuels such as gas and diesel.

Currently, humans prepare methanol by directly synthesizing H 2 and CO, CO 2 with heat, at low pressure, with catalysts in the direction reaction process:

Methanol is a light alcohol, a volatile liquid, colorless, flammable and has a characteristic odor like white wine. At room temperature, Methanol is a polar liquid and is often used as an antifreeze, solvent, fuel, and denatured ethanol. Methanol meeting fire will burn with low heat source, very difficult to see in daylight.
Methanol is extremely toxic, in small amounts can cause blindness, even death when the body is exposed to more. Methanol is a byproduct of the process of industrial alcohol production, so ethanol in the laboratory contains a lot of Methanol so absolutely do not drink alcohol or use alcohol instead of alcohol.

– Misuse may cause blindness or death

– When CO, CO 2 is high, it can even cause explosion (especially for heated sealed containers).

What is methanol used in life for?

The application of Methanol has long been recognized by humans, it is widely used in life and industrial production, specifically:

– Methanol solvent is a fuel for the transportation industry, creating methyl tert-butyl ether to mix to increase the octane ratio instead of lead tetraethyl as a pollutant for the environment.
– Methanol is a common solvent used in the laboratory, especially for running liquid chromatography, lifting HPLC cap, UV-VIS spectroscopy.

– Commonly used in the production of formalin, formic aldehydes and acetic acid, etc.
– Methanol has an important role in paint, printing, antifreeze, as fuel for small stoves, providing engine fuel for combustion. 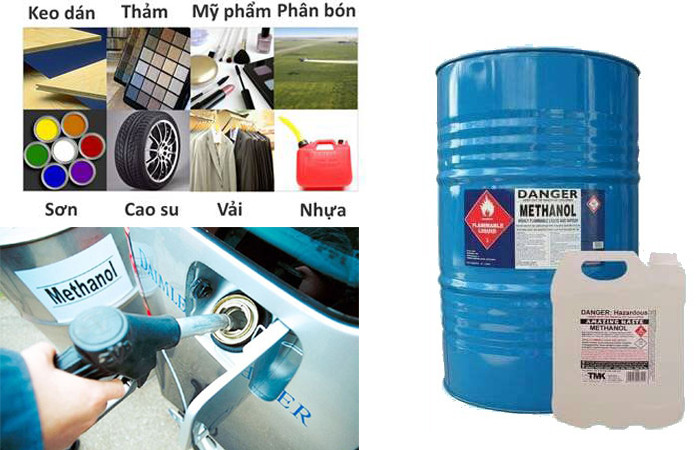 In addition, chemical methanol is also used to produce industrial methanol, a product called “denatured alcohol”. However, this has been banned because many people use it to produce illegal alcohol, causing many deaths from alcohol poisoning with methanol. Not only is it a highly beneficial industrial product, it is also used in laboratories, schools.

Methanol is flammable so it should be stored away from sources of ignition, electricity, direct sunlight, in a well-ventilated place, away from oxidants and tightly closed containers when not in use.

Advantages and disadvantages of methanol

Methanol is a toxic substance but it is still widely used by people because of its outstanding advantages that can solve problems in production, cost and time.

Methanol is toxic to the body, it is easily absorbed by humans’ intestines, skin, and lungs. Low levels of methanol can lead to drowsiness, confusion, headaches, loss of mobility, which can lead to coma, breathing failure, hypotension, cardiac arrest and death.

Methanol poisoning is a serious and dangerous poisoning, so we should pay attention when using. Avoid drinking alcohol that has not been tested and tested by health facilities or food safety and hygiene authorities.

Alcohol containing high levels of methanol can cause poisoning when drinking